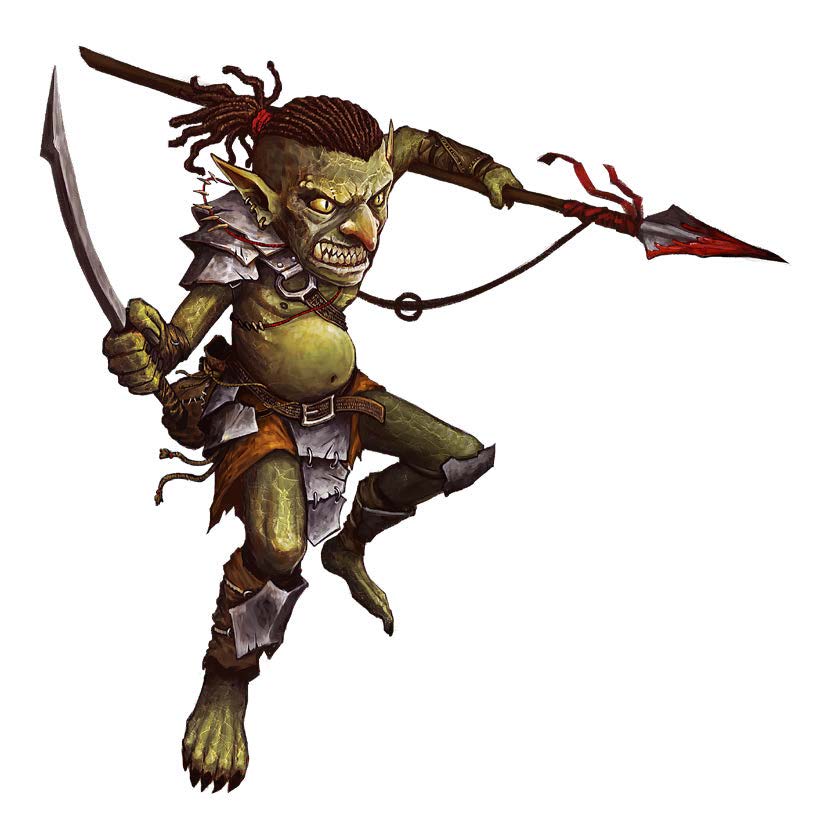 Among the dust-goblin tribes of the Wasted West, there exist some with traditions calling for certain tribal elders, spirit callers, and witch doctors to carry out enigmatic rituals among the wraith-haunted vales of the Flensing Gulch. Those who return, return changed—somehow less than alive, altered by deranged sacraments and the abhorrent, necrotic magicks of the wraiths and other deathless horrors still haunting Flensing Gulch. These warped petitioners called, bargained, and communed with undead horrors and now share the ravenous, nihilistic ambitions of the unquiet dead. Freakishly tall for any goblin, gaunt, famine eyed, and bone white, the stooped, fetish-draped form of the boneshard shaman easily stands out from its peers. Necromantic sigils, symbols, and runic script tattooed, cut, and burned across every inch of its hide makes discernment in the field all the easier.

Boneshard shamans live primarily in the northeastern fringe of the Wasted West, near the dust goblin tribes of the Bonewraiths and Sand-Bird’s Disciples. They rarely exist outside of those groups, due to the location of the only known transformation site in the Flensing Gulch, and do not seem to care for the recent “Beloved Leader of all Goblins.” Occasionally found alone, wandering, or establishing a lair in a lonely cave or ruined structure, boneshard shamans hate anyone but dust goblins and attempt to capture them for either sacrificial or other, far more terrible purposes.

Grave Gifts. Infused with the necrotic essence of unlife, the shaman shares condition immunities and damage resistances with undead (calculated above).

Spellcasting. The shaman is an 8th-level spellcaster. Its spellcasting ability is Wisdom (spell save DC 15, +7 to hit with spell attacks), it has the following spells prepared:

Grasp of the Gulch (3/rest). The shaman selects a target it can see within 30 ft., enveloping it in a magical whirlwind of scouring sand, salt, and caustic bone dust. The target must succeed at a DC 15 Strength saving throw or become deafened, blinded, and restrained while taking 18 (4d8) acid damage per turn until the save succeeds (repeated at the start of each of the target’s turns) or until the effect ends after 3 turns.

Sandstone Stave (+2). Melee Weapon Attack: +7 to hit, reach 5 ft., one target. Hit: 15 (3d6+4) bludgeoning damage and succeed at a DC 15 Constitution saving throw or suffer Curse of Sand (50%), subtracting 15 feet of movement for 10 minutes, or Curse of Stone (50%), subtracting 3 from the target’s Dexterity score for 10 minutes. A target is affected by only one sandstone stave curse at a time. If the shaman dies or mentally wills it, the sandstone stave crumbles into sand.

Shardstorm (2/rest). The shaman conjures a lacerating maelstrom of knife-edged boneshards in a swirling cylindrical cloud (30ft. × 60ft.) centered on a spot the shaman can see within 90 feet. Targets within the area suffer 27 (5d10) slashing and 18 (5d4) bludgeoning damage or half as much on a successful DC 15 Dexterity saving throw.

“The phenomenon of the boneshard shaman was until recently thought the strict purview of zealots and holdouts from the Bonewraith and Sand-Bird’s Disciples tribes. Lately, however, ongoing scouting and scrying reports from the Seekers have begun challenging these discernments.”