Skip to content
Home / Delve into the Depths in the Kobold Blog / Amarok: The Spirit of the Wolf 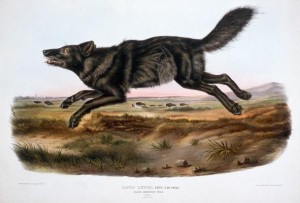 Deities play a large role in fantasy games in both direct and indirect fashions. Amarok, the Lord Alpha and Mighty Huntress, can add a touch of the wolf to your game.

Titles: The Spirit of the Wolf, Lord Alpha, Mighty Huntress

An ancient deity whose worship predates civilization, Amarok is a noble god of leaders and also a goddess of the hunt. Although her gender is fluid, to his faithful Amarok’s duality makes perfect sense; it is as natural as the wolf that protects his pack or hunts prey for her pups. The hardy tribes people of northern climes are Amarok’s typical worshipers, but her faithful are among any who have vowed to hunt honorably, lead with strength and wisdom, and protect their kin.

No matter the gender ascribed to her, Amarok’s avatar is always a gigantic wolf with ebon fur and piercing eyes the color of molten gold. His teeth and jaws often drip with blood, either from a fresh kill or from enemies who foolishly threatened her children. Amarok manifests to his followers very rarely, but it’s said that any wolf with raven-black fur is a sign of her favor. Some tribes have even supposedly received cryptic messages from black wolves in the form of stolen livestock, returned waifs, or gifted kills. These happenings, the faithful say, are Amarok’s way of providing warnings or showing mercy.

Tenets of the Faith

These same tribes also claim that Amarok’s wrath is a fierce and terrible thing. Whispers abound of entire villages that have been decimated by enraged wolves after their inhabitants angered her. While pursuing an honest hunt and keeping loved ones safe are simple ways to please Amarok, he despises those who humiliate weaker opponents, revel in cowardice, or kill for sport. Additionally, those who kill a wolf, even by accident, have surely made an enemy of Amarok.

Amarok is fiercely devoted to the untamed wilderness and open sky, and so her clerics typically build no temples in her honor. Instead, they sometimes build small shrines to him in their villages; these holy works usually involve a wolf’s head carved into fine wood, stone, or, rarely, obsidian. Amarok’s clerics also prize any wolf claws they find—as long as the items have been naturally shed.

Clerics of Amarok usually say their prayers each morning over a fresh kill or, if that’s not possible, a sacred wolf claw. In addition, Amarok’s faith contains numerous minor rituals meant to garner her favor—mostly performed before hunts or when enemies threaten.

Amarok’s most sacred ritual takes place every year in the dead of winter. This tradition, known as the Trial of the Wolf, involves a village’s strongest ram, bull, or other livestock beast. The faithful place the untethered animal near a shrine to Amarok; if a wolf preys on the creature within 24 hours, Amarok’s clerics declare that the Spirit of the Wolf has shown her favor and accepted the sacrifice. In this case, a great, jubilant feast is had. If the sacrifice remains unaccepted, however, the villagers believe they must work harder to please the noble Amarok—as his favor might be the difference between their life and death.

3 thoughts on “Amarok: The Spirit of the Wolf”