Skip to content
Home / Delve into the Depths in the Kobold Blog / Character Collection: Roka Mangouger, the Holy Terror 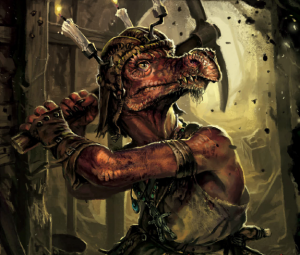 The largest and fiercest kobold in a generation, Roka does not dodge or scurry. She charges into battle, rending her foes with tooth and claw. However, Roka is not simply an unthinking killer, she is also the priestess of the strange and bloody kobold goddess of eggs and pregnancy, Clutchmaw. Mangouger uses her rage and strength in the service of her bloody goddess. She defends vulnerable clutches of  kobold eggs from all danger, and she tracks down neglectful or slacking kobold husbands to put the fear of her goddess in them.

Roka’s father did not tend to his mother when she was pregnant with Roka’s clutch deep within the kobold ghetto of Zobeck. Instead, he gambled and schemed and lived high, while Roka’s mother struggled to catch rats and other vermin for food. The resulting clutch was a single, battered egg, and Roka’s mother protected it until she hatched, but died of starvation soon after. Despite her circumstances, the Mangouger was already a strong and tough pup, and she soon dominated the local hatchling pack. Within a few years, she was already pit-fighting and going head to head with giant weasels, dire rats, and adult kobolds. Her feral, throat-ripping combat style was popular and Roka became a minor celebrity.

It is then that the Clutchmaw found her. Roka was born again and saw the callous disregard for clutching kobold mothers in the ghetto. She began a campaign of brutal violence against those who failed to provide for clutching mothers, beginning with breaking both of her father’s arms. She also found that the powers of Clutchmaw helped her to undertake her holy task, enlarging her in battle and giving her holy endurance.

Roka is aggressive and direct. She has no fear of injury or pain, often taking a hit on purpose to show her toughness and demoralize her foes. She has an abiding interest in kobold midwifery, acting as an advisor and enforcer for pregnant kobolds. While skilled at helping kobolds through their pregnancies, Roka also believes that she knows what other species need as well. She is convinced that all species lay eggs, and will ask females of other races penetrating questions about their egg laying, and how their clutches are doing. She will also offer well-meaning singularly bad advice to pregnant women of other races (this being good advice for kobolds), such as the value in giving birth in a dirty chamber or in driving rain so as to toughen up the eggs, and the need to eat large amounts of shells and chalk to make shells hard.

As a party member: Roka is a quirky but valuable member of an adventuring party. She is both a front line fighter and a healer, as well as an able buffer. She will never achieve very high level cleric spells, but her enlarging and blessing spells can greatly improve a party if well used. Her goal is to be put into a position to full attack, making use of her three attacks after 2nd level.

As an Ally: Roka has knowledge of both the ghetto and the fighting rings of Zobeck in the city proper and the cartways. She has traveled all over the city, and fears nothing above or below the surface. In the cause of helping kobold mothers, she is willing to guide and advise too-talls around the less savory and accessible areas of the city. In combat, she is a doughty and powerful ally who is willing to wade in and draw attacks.

As an Enemy: Roka has done mercenary work and is more than happy to align herself against greedy too-talls or kobolds whose actions cross the designs of Clutchmaw. She likes to have a group of supporters when taking on obviously powerful foes, and will attempt to have an advantage in terrain (the crowded kobold ghetto is a great place for ambushes). If she believes the party has crossed her, she will begin to harass and strong-arm their supporters, and then ambush the adventurers in the ghetto when they come looking for her.

Queen Roka: At high levels, it is not impossible that Roka may become one of the rulers of the kobold ghetto. Her rule will be marked with turbulence, as her devoted followers chase down neglectful kobold parents, leading to a exodus of political refugees from the ghetto, and thus chaos in Zobeck proper as the queen’s zealots follow them down. As either supporters or opponents, the player characters could find themselves in the middle of quite a bit of kobold mayhem.

Hooks
The Egg Heist: A group of mercenaries that has one or two members that superficially resemble the PCs (members of the same order of knights, or guild of thieves—all humans look alike to Roka) killed a kobold mother and took her eggs to sell to a necromancer in the collegium. Roka is not very bright and is convinced the PCs are behind the theft. She targets friends of the group for harassment, hoping to lure them into a confrontation in the ghetto. Note that Roka is equipped as a PC of equal level. If used as an NPC villain, this increases her CR by +1.

Nicholas wants to share his PDFs of the character builds he made using Hero Labs with you, so we’re hosting them here! Additionally, the image affiliated with this article comes from Advanced Races: Kobolds, which provides you with more options for kobolds, and you can order a copy of Advanced Races: Kobolds today!