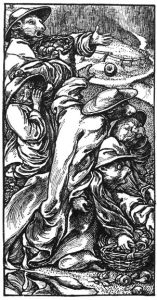 If there’s one thing guaranteed to catch an adventurer’s eye, it’s a precious stone. If magpie tendencies seem to be running rampant, the following can be used to add a little variety to your loot or even as inspiration for a story hook. The value of the items can vary at the DM’s discretion but are suitable replacements for a handful of coinage or minor quest reward, although they could be worth more to the right person. You can roll randomly for a result below using the handy number provided with each entry to figure out your result on a d20. You can also pick one that works for the area in which your characters currently linger.

1. A fist-sized fire opal that seems to glow with an internal light, illuminating the cloud-like formations within. (Fire Opal)

2. A small pile of silver crystal shapes with a half-melted look. (Gallium)

4. A simple quartz crystal with a series of emerald green and brown straws extending from within its central structure. (Tourmaline in Quartz)

9. A rough, milky white gem with a red crystal grown directly through one side and tinged with yellow discolorations. (Realgar)

11. A broken lump of dark gray rock that shimmers like a rainbow along its jagged surfaces. (Titanium Quartz)

12. A handful of tiny clear stones marred by a black, cloudy interior. Periodically, bright blue and white flashes like lightning bolts can be seen within. (Black Opal)

14. A ragged hunk of malachite has been broken open to reveal a series of translucent cyan domes. (Chrysocolla)

15. Hundreds of delicate, clear white crystals the length of a finger radiate from a central point. (Strontianite)

16. A vivid, deep purple crystal appears to consist of a random assortment of thousands of tiny cubes bound together. (Fluorite)

17. A small, polished, fossilized cross-section of wood. The interior cracks have filled with some opalescent material in shimmering blues and green. (Opalized Wood)

18. A rough-hewn rust-colored stone filled with half-buried flakes of dark blue crystals forming the semblance of a rose. (Azurite)

19. A dark green egg-shaped stone has been worn away on one side to reveal a rough, vivid purple interior. (Geode)