Real Steel: The Mystery of Steel—Magic and Magnetism 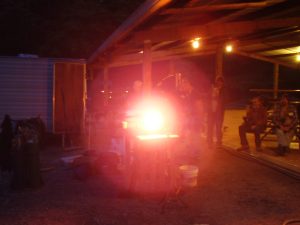 What is steel? An alloy of iron and carbon.

How could something so apparently simple be the subject of so much myth, mystery, and debate? The short answer is that steel does some very strange things that we still don’t fully understand, and it is exponentially tougher and harder than the iron, copper, and bronze we used prior to its discovery.

Many metals can be work hardened. Work hardening is the result of cold working a metal and can happen by repeated striking of the metal or by bending or machining, such as drilling, milling, or scraping. The hardening comes from a distortion of the crystalline structure of the metal, but no one knows for sure how that distortion makes the metal any harder.

You can see this yourself. Take a piece of copper wire (1/8” diameter or close to it should work fine) and bend it back and forth. You’ll notice two things: it gets warm, and it gets harder to bend. If you keep bending after it hardens, it experiences what is known as fatigue and eventually breaks. If you take that same piece of hard copper wire, heat it until it is red-hot, and then quench it in water, it becomes very soft again.

And that’s when things start getting strange…

All steel, even steel with a low carbon content, can be work hardened. But starting at a carbon content of between 3–4% or more, steel can also be hardened by heat treatment. It does exactly the opposite of what non-ferrous metals—such as copper—do under the same conditions.

If you take a piece of simple carbon steel with a carbon content of 6% and heat it to critical temperature (more on that later) and then quench it in the appropriate liquid (different steels need different quenchants), it forms a crystalline structure called Martensite and is very hard and brittle. Once cooled to room temperature, that steel shatters like glass if it is struck or dropped.

But if you temper that piece of steel by re-heating it to temperatures between 300–500° F and holding it there for 1–2 hours, the steel retains much of its hardness and loses much of its brittleness. To soften—or anneal—steel, you must heat it to critical temperature and then cool it very slowly over the course of about 8 hours.

That’s the secret of properly heat treated steel—it’s brittle first and then softened to make it usable.

Is carbon steel magnetic? Of course… not, well, sometimes. It is magnetic at normal temperatures, but critical temperature (about 1420° F for simple carbon steel) also makes steel non-magnetic. But it doesn’t become magnetic again until it drops to about 500° F.

Is it just me, or is that weird? In fact, that sort of change seems to suggest something for fantasy smiths: perhaps enchantments can be laid on steel only when it is non-magnetic? Or perhaps steel is resistant to enchantments except when it is being forged, requiring the enchanter to work closely with the smith.

Although there are solid theories, no one knows for sure, provably, why steel hardens when heat treated, or softens when cooled slowly, or becomes non-magnetic at 1420° F but doesn’t regain its magnetism until it cools to 500° F. When something behaves strangely, we humans love to speculate, and if no logical answer is found, we create myth. Steel has a lot of myths and legends…

I don’t have any better answers to these questions than anyone else. But I’m glad we have steel… I can make much better blades with it than with bronze!