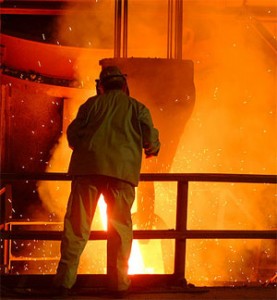 Volumes upon volumes have been written about steel chemistry and properties, and which steel is best for a particular job. The kobolds prefer if I keep it to around 500 words (kobolds have short attention spans), so I’ll quickly cover simple carbon steels and low alloy tool steels. Although stainless and high alloy steels have their uses, they cannot be used effectively for high impact weapons such as swords and axes, so perhaps we’ll deal with them at another time.

There are literally hundreds of types of steel, so we’ll only be scratching the surface and focusing on the most common types used in common cutting tools.

Simple Carbon Steels; or the Power of 10’s

Simple carbon steels, also sometimes referred to as 10 series steels, or spring steels, have the simplest chemistry of any of the hardenable steels. Although they can contain small amounts of alloying elements, for the most part they are iron and carbon. They are called 10 series steels because they are described by a 10 followed by a second two digit number. The ten simply means that it is iron and carbon without any significant alloying elements added. The second number tells how much carbon is in the steel. For example, 1075 contains approximately 0.75% carbon.

There are lots of types of low alloy tool steels, but these are some of the types most commonly used in cutting tools: 5160, 52100, W1, W2, and O1. Some might argue that at least some of these steels belong with the 10 series steels, but they are different enough that I want to talk about them separately.

Let’s start with 5160 and 52100 because they are related. The 51 in 5160 indicates that this steel is low chromium and the 60 indicates a carbon content of 0.6%. It makes very tough blades and is good for swords and axes. In industry it is commonly used for automotive springs and is sometimes called spring steel along with its cousins in the 10 series.

52100 is commonly used in bearing races and ball bearings because it is capable of high hardness and is very wear resistant. The 52 indicates medium chromium content and the 100 tells us it contains 1% carbon. This steel is difficult to forge, is easily screwed up by inattention to temperature, and hard to heat treat properly . . . but it makes a very hard and durable blade up to the size of a large knife. It’s too brittle for swords, but I know a smith or two who successfully make small hatchets from it.

W1 is a water hardening steel that is essentially a cleaner version of 1095. The W means it’s water hardening and the 1 stands for “type 1” or “formula 1.” W2 is the same formula as W1, but has vanadium added, which increases wear resistance. These are both great all around steels for small and large blades. W2 is especially well known for forming excellent hamon. Although they are water hardening steels, small cross sections (such as blades) are safer to harden in oil to avoid cracking in the quench.

The “O” series has a few members, but nowadays O1 is the only one readily available. The O indicates an oil hardening steel, and I guarantee it will crack if hardened in water. Again, the “1” is the formula number. O1 contains 1% carbon, so is capable of making a very hard blade, but as with other very high carbon steels it is too brittle for swords and other very large blades.