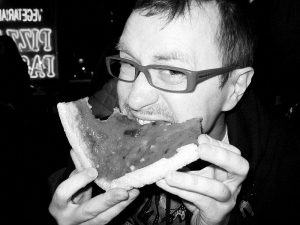 In this latest in our series of “My First Gen Con” guest posts, indie game designer Luke Crane shares his Gen Con memories.

Thanks to all of you who shared your Gen Con stories—we’re reviewing the entries now and will announce the contest winner on June 30th!

In March of 2003, I found a thread on the indie-rpgs.com website entitled, “Organizing for Gen Con” or something similar. I had never posted to this site before. And I had never been to Gen Con. I posted a reply, “Hey, I made a game. Can I share your booth?” These kind, trusting souls responded in the affirmative. “Sure. No problem. Here’s how you pay.” I was curious and skeptical. They seemed a little too inviting…

Five months later, I was standing at homey little end-cap in the exhibit hall of Gen Con. The booth was adorned with scrappy little games. I was surrounded by other small press, self-published authors. There was energy, camaraderie. It was exciting. I was at Gen Con! But I was also nervous and a little timid. I had no idea how to, well, sell my game. I didn’t want to seem too pushy. And I was too shy then to simply accost random passerby.

Enter Scott Knipe, a gentle giant of a man. Scott, much to my astonishment, stood at the corner of our both, cheerfully hawking my game. “You like fantasy roleplaying games? This one is the best deal of the con.” I had never met Scott before, and I haven’t seen him much since, but on that Saturday in August, he was my hero and mentor.

Later, I was demoing my game when I looked up and saw my comrades gathered around an older, stately looking gentleman in a summery button-down shirt and open-toed sandals. One of my compatriots grabbed my elbow and steered me toward him, “It’s Ken Hite.” Who? “He’s a big reviewer. You should give him your game.” For free? Oh hell no, I’m not giving away my games! He can buy it if he wants it…

Despite my protestations, he shoved both me and my game at Mr Hite. We had a brief exchange in which Mr Hite asked me about my game. He indicated that he would reluctantly accept a free copy. I hesitated, “Will you review it?” He responded glibly, “If it’s good, I’ll review it.” I looked him dead in eyes and retorted, “You’ll review it then.”

And the rest, as they say, is history.

Luke Crane is the creator of The Burning Wheel, which Ken Hite named the Best New RPG in 2003.