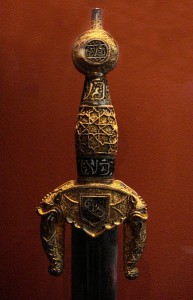 For most adventurers, treasure is the greatest lure and reward of their profession. Powerful weapons, potent magic talismans, and several lifetimes’ worth of gold are strong incentives for many to take up the lifestyle.

The malforged are living examples of the adventuring occupation’s dangers. These former adventurers have had their dreams of riches turned into nightmares of enslavement at the hands of malevolent beings disguised as the treasure they sought.

Malforged are warriors who have been infected by a parasitic, liquid metal entity that has transformed them into murderous living weapons.

At first glance, a malforged looks like a normal warrior. This impression lasts no longer than a few seconds, however, for the malforged has a mind dedicated solely to battle and slaughter—urges that drive it to fight and kill everyone within reach.

The parasite that creates the malforged provides the monster with everything it needs to be a powerful combatant. Its liquid metal form enhances the host’s muscles and bones, making it stronger, tougher, and faster than before. The parasite can also seal the malforged’s wounds with liquid metal that hardens swiftly, giving it more armor protection in the process.

What makes the malforged truly deadly, however, is the parasite’s ability to shapeshift into any melee weapon, which then emerges from the malforged’s body, giving the already powerful monster access to any weapon it will ever need. The malforged can even use this ability to fire sharp metallic slivers at its opponents, mentally controlling projectiles so they continue tearing through the target’s body after the initial impact.

Anyone who fights a malforged should not mistake the monster’s bloodlust for stupidity, as it has an instinctive understanding of combat tactics. This aptitude, combined with its excellent combat skills, makes it capable of fighting entire parties and winning.

Any discussion of the malforged is incomplete without an examination of the entity that creates them. What little is known about this unusual creature (called a “malforged parasite”) suggests that its natural form is a blob of liquid metal. It’s rarely seen in this form, however, as it has the ability to shapeshift into virtually any metallic object.

Malforged parasites make their homes in treasure troves of every kind, from a city bank vault to an underground dungeon cache. Once they find a home, they shapeshift into treasure that is suitable to the hoard’s contents but that also stands out–for example, a particularly formidable and eye-catching sword among a cache of weapons. The parasite then remains in this form until it encounters a suitable host. It usually waits until the prospective host picks it up so that its victim cannot easily escape, but it’s capable of moving with astonishing speed if that opportunity doesn’t present itself. Once the parasite makes contact, it seeks out the victim’s bare skin, flowing toward such areas and seeping into the skin. At this point, the parasite quickly spreads to the victim’s brain and seizes complete control of its new host.

Traits
Grow Weapon
The malforged grows a melee weapon, which it can draw or put away as part of the same action used to attack with the weapon.

[m] Spiky Carapace * Recharge 5 6
Attack: Melee 1 (one creatures); +13 vs. AC
Hit: 4d10 + 5 damage.
Effect: The malforged gains a +2 bonus to AC until the start of its next turn. It cannot use weapon strike or grow weapon until spiky carapace ends.

Triggered Actions
Metallic Clotting
Trigger: The malforged is bloodied
Effect: While bloodied, the malforged gains a +2 bonus to AC.

A malforged first targets either the party leader or the most physically dangerous party member with its spiky carapace, using an action point if necessary. After that, it tries to eliminate the remainder of the party one by one, using weapon strike and living arrow if spiky carapace is unavailable. The malforged will use any terrain available to aid its attack, whether that involves hiding behind rocks or felling a tree to crush an enemy.

Destroying a malforged destroys the parasite controlling it, as the death of the host delivers a deadly amount of feedback to the parasite.