Midgard Icons: …And The Rest 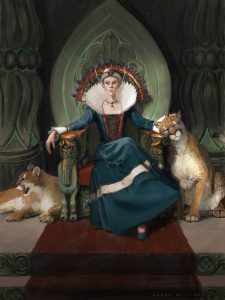 I recently wrapped up the 10-part Midgard Icons series here on Kobold Press. It was great fun to write, and the feedback on the series has been fantastic.

I wanted to follow up with some ideas on adding more icons to the list, as well as thoughts on where the Midgard icons fall on 13th Age’s heroic/ambiguous/villainous scale.

13th Age includes 13 icons drawn from standard fantasy RPG tropes: a powerful lich, a mighty mage, a queen of the elves, a king of the dwarves, a summoner of demons, and so on. Several of these can serve as templates for additional Midgard icons. Here are three to consider:

The Beloved Imperatrix—Regia Moonthorn Kalthania-Reln van Dornig is an ancient elven woman who speaks in a whisper that can carry the length of a ballroom, and she moves with a quiet grace. The Imperatrix seems to be feeling her years: She sometimes refers to a courtier by his grandfather’s name, and she might need to be reminded that some important business is unresolved. But those who assume that they are dealing with a frail, elderly woman in her dotage are surprised by how much this withered old elf knows.

The Illuminated Brotherhood—Originally formed to protect dwarven trading secrets and strengthen moral character among its members, the esoteric society is open to all dwarves who qualify and seek perfection in their chosen craft. Many high-ranking members of dwarven society, including some kings, count themselves among the ranks of the Illuminated Brotherhood. Rumors and legends of the mysterious society persist, with outsiders often accusing the order of hiding terrible secrets and negotiating behind-the-scenes manipulations of craft guilds and government.

The Master of Demon Mountain—The Master of Demon Mountain’s spells and incantations carry great potency. The demons praise him, and his many children are tiefling ambassadors to the world, heralds of his power. But his real goal is to reach immortality—although first he must break the pacts binding him to Demon Mountain. The Master swore dark pacts to gain power over the mountain and its creatures, but these bargains were not the endless font of power that he had hoped. Indeed, some suspect that Demon Mountain itself is the true master.

Most Midgard icons are at least somewhat ambiguous—that’s the nature of the setting—but here’s how I’d break them down.

Ambiguous Icons: Usually Baba Yaga, The Oracle of Kammae, Exarch Vermes II, The Dragon Sultana; possibly The Queen of Night and Magic, and The Illuminated Brotherhood

Villainous Icons: Usually The Ghoul Emperor, The Queen of Night and Magic, The Glittering King, The Master of Demon Mountain; possibly Baba Yaga, The Oracle of Kammae

Art by Aaron B. Miller