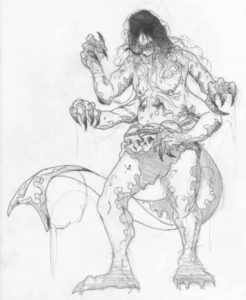 Fetid, gore-choked breath—you smell the abomination before seeing her. Taller than two men, this massive creature stares down from a crazed woman’s face of cerulean skin, the color of the deepest seas, wreathed in a wet tangle of blue-green, kelp-like hair. Her eyes are obsidian, her mouth a twisted, oversized gash of 2-inch ragged teeth. The distended jaw does not mask the wicked, open grin of brutal hunger or a long, serpentine tongue. About her hips hangs a belt of waterlogged heads, some missing a nose, eye, or ear. Four arms, tipped with razor-sharp talons stained black with blood, unceasingly claw for prey. She pauses to sniff the air, then strides past your hiding place, her shark-like tail subconsciously swaying from side to side.

Blood Frenzy (Ex): After taking damage in combat, Kankodraa may frenzy as a free action in the following round, attacking madly until either she or her opponent dies. She gains +2 Constitution, +2 Strength, +2 to Will saves, and suffers a −2 penalty to AC.

Breaching Lunge (Ex): As part of a charge, Kankodraa may leap from the water and make a bite attack before continuing her movement back underwater.

Jaws of the Devourer (Ex): Kankodraa’s bite may use one of these options:

Devouring Bite—Kankodraa may swallow a grappled opponent of up to one size smaller by making a successful combat maneuver check. The swallowed creature takes 2d6+8 bludgeoning damage and 8 acid damage per round. A swallowed creature can carve its escape by using a light slashing or piercing weapon to deal 25 damage to the gizzard (AC 12). Once free, muscular action closes the tear; another swallowed opponent must cut its own way out.

Uncaring Bite—Kankodraa may bite an opponent’s held or carried object in an attempt to disarm without provoking attacks of opportunity. She gains a +2 bonus to combat maneuver checks made to disarm. She swallows disarmed objects, which may be recovered by opening her carcass or after being swallowed. Wood and metal items remain undamaged by the creature’s digestion.

Keen Scent (Ex): When underwater, Kankodraa notices creatures by scent in a 180-ft. radius and detects blood in the water a mile distant.

Mouthpiece of Dagon (Ex): Kankodraa communicates telepathically with sharks up to 150 ft. away. Communication is limited to simple concepts. She uses the Intimidate skill to command and direct sharks, ignoring any penalty to Charisma.

Predator’s Focus (Ex): Kankodraa shrugs off magical effects that would otherwise control or compel her. If affected by an enchantment and Kankodraa fails her saving throw, one round later she may attempt the saving throw again. She only gets one extra chance to succeed.

Saltwater Nature (Ex): Immersion in freshwater prevents Kankodraa’s regeneration and inflicts 1d6 damage per hour of immersion until she returns to saltwater.

Sired by a whim of Dagon while straying from his abyssal home, Kankodraa is unique.

Kankodraa operates alone, ravaging coastlines and shipping lanes because she knows nothing else.

Kankodraa lurks at the water’s edge, determining who appears most vulnerable before wading into combat, clawing ferociously at the closest, least armored opponent. If vigorously opposed, she grapples to rend or pull enemies underwater.

A feral, demonic killer infused with the glory of Dagon, Kankodraa cannot conceive of defeat.