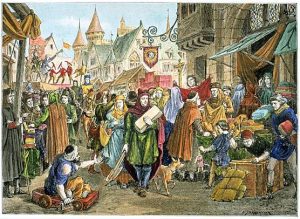 Guilds were a notable feature of urban life in medieval cities. If you were a craftsman of any type in Europe during the Middle Ages, you almost certainly belonged to a guild.

Guilds show up in fantasy RPGs and campaign settings, too; every city has a thieves’ guild and a wizards’ guild. It’s mostly lip service, though, because those guilds seldom do anything other than issue vague threats (thieves’ guild) or accidentally blast their guildhalls through dimensional portals (wizards’ guild).

So what should a guild do? What DID a guild do? Or in other words, why should your character pay dues? (Yes, there are dues. The name “guild” comes from the gold collected in membership fees.)

It’s easy and natural for modern minds to compare medieval merchant guilds to our modern trade unions, but that’s a bad comparison. Guild members were not employees; they were independent business owners who shared a common industry. In modern terms, guilds were more akin to small business associations.

By the late Middle Ages, guilds were highly specialized: harness makers and harness polishers, for example, had separate guilds. In FRPG terms, longbowmen and crossbowmen probably wouldn’t mingle in the same 14th Century guildhall, let alone hang with those knuckle-dragging sword swingers. That’s a bit extreme. Unless that degree of specialization serves a purpose in your campaign, I wouldn’t carry things to that degree.

First, it passed along the trade secrets that made a skilled craft possible by overseeing the training of apprentices. The guild wasn’t responsible for actually training anyone, but it did verify that training was being absorbed. Candidates for membership progressed from apprentice through craftsman, journeyman, master, and finally grand master.

Second, the guild protected those secrets. The first period of an apprenticeship often involved a lot of drudge work and very little training. It was more a vetting process than a training program. Before revealing the secrets to making a quality sword, shoe, or glove to a new apprentice, the guild wanted to be sure that he or she could be trusted with secrets. Trade secrets were the life’s blood of every member in the guild. If everyone knew how to make a sturdy wagon wheel, wheel sales would plummet. Membership in a guild was sealed with powerful oaths of secrecy and allegiance for just this reason. These oaths were so strongly worded that the church cracked down on some of them, claiming that they crossed the line into conjurations.

Third, the guild protected the reputation and livelihood of everyone in it by vouching that all its members were competent at their craft. A guild’s reputation depends on the quality of its product. If you buy a pair of boots in Wellingtown and the soles fall off before you reach Skull Tower, your medieval mind lays the blame on the Wellingtown bootmaker’s guild for certifying an incompetent cobbler and letting him tool the Wellingtown guild trademark onto his product. Those shoddy hikers reflect badly on everyone who is patented by the Wellingtown bootmaker’s guild. If it licensed one idiot, it probably licensed dozens. For guild accreditation to be a plus instead of a minus, the standards need to be high.

Now that we’ve reviewed what guilds did, what can they do for your character? What are the benefits of membership?

Every guild was established by some form of charter from the king, the ruling noble, or the mayor or city council. Charters conferred certain rights and privileges on guild members, and those privileges will be jealously denied to anyone who doesn’t pay dues into the guild coffers. You can set whatever privileges you like in your campaign, but #1 would be practicing a trade at all. A powerful wizards’ guild probably would be within its rights to prohibit nonmembers from casting spells in its territory. You want to cast spells? You need to join the guild. Enforcement might seem a problem, but if you’re the guild master concerned about this, you’ll figure out something.

Another common privilege was the wearing of special attire. Guilds were sometimes called livery companies because members were entitled to wear clothing denoting or befitting their profession. The “costume” that denotes a warrior is armor. The local warriors’ guild might well have a provision in its charter prohibiting nonmembers from wearing armor, or armor above a certain grade (chain mail or better, for example), or armor that’s enchanted.

Like trade unionists, members of related guilds tend to support one another. A group of adventurers might be able to buck the warriors’ guild, the thieves’ guild, and the wizards’ guild when they come to town, but what happens when they visit the weaponsmith, the armorer, and the alchemist for repairs and resupply? If they aren’t members of their respective guilds, they could be refused service out of solidarity with those associations.

Remember that guild masters are, by definition, masters of their trade. The head of the local warriors’ guild won’t be some schmuck with a rusty glaive left over from a war twenty years ago. He or she will be the best fighter the area has to offer. That’s not the person you want to cross on your first day in town.

Finally, guild members travel (journeymen, remember?). If characters upset the guild in one town, word will get around—possibly faster than they do.

Those are all things the guild can do TO you. What does the guild do FOR you?

It starts by opening doors. If you roll into town as a guild member in good standing, you’ll find readymade contacts who are duty-bound to provide support just by checking in at the guild hall. In a dangerous world, locals might not talk to or trust strangers, but it’s a different story if you can produce guild credentials. A guild master rated you as a responsible, accomplished person, and even if he or she is from a hundred miles away, that opinion carries weight.

Second, a guild ranking grants you instant credibility as a professional who deserves respect. Any clown can pick up a sword and shield or don a pointy hat and a robe festooned with stars. Your journeyman status testifies that you’ve proven your proficiency to an acknowledged master of your trade. Consider it the Angie’s List of a sans-Internet world.

Third, guild sanctioning can give you access to special services that are reserved for members only. Healing tops the list, but magic item identification, equipment repairs, specialized gear, access to private libraries, and clearance to hire men-at-arms, sages, or alchemists should also be included. Hirelings in particular form an interesting case. Even if the guild doesn’t strictly prohibit nonmembers from hiring in their town, most of the people worth hiring probably are guild members, and they might not be willing to work for an outsider with no credentials. If they are willing, they may charge more than the standard rate and give less than 100% effort. Anyone available for hire who isn’t a guild member raises the flag of why not? If he or she was rejected by the guild, you might not want this person watching your back or your supplies.

Finally, membership offers some protection against poaching on your skillset. If your group runs afoul of another band of adventurers, guild members can lodge a complaint with the adventurers’ guild and possibly see some results. Nonmembers are going to be shown the door, or possibly the window.

Modern scholars have mixed thoughts on whether medieval guilds promoted economic and social stability or stifled innovation and growth. I suspect they did a little of both. Uncertainty over their legacy is no reason to ignore them in your fantasy campaign. If anything, it’s a license to employ them in creative, unusual ways.

Has one of your characters ever belonged to a guild? Was it worth the membership fee?