The purpose of this chapter is to demonstrate why playing cards are such a potent choice for generating our environment.

We didn’t choose cards as our randomizers because they’re somewhat room-shaped. That’s a happy coincidence. The real reason is because they have information embedded on them, and we can use that information in all sorts of useful ways.

A playing card has two obvious bits of information: suit (clubs, diamonds, hearts, spades) and value (1-13). Those aren’t, however, the only way to classify their information. Suits can be reduced to red or black, and value can be looked at as 1-10 plus face cards. With so much encoded information to play with, we can combine bits to derive other values and create further groupings: odd black cards, for example, or red face cards.

To use all of this to generate a dungeon, we must assign meaning to the values. This can be done many different ways, but today, we’re trying to create a fairly simple, low-level dungeon crawl: a cavern system that was used for human burials centuries ago, but nasty underground denizens have moved in since.

Suit determines the room’s danger level. Black rooms have no monsters or other occupants. Diamonds have a few monsters, equating to an easy or moderate encounter. Hearts have enough monsters to be a tough encounter, whatever that is under your preferred rules.

Value indicates the type of monster in the room, with higher values indicating tougher monsters or a mix of types.

Face cards, because they’re special, indicate something special about the room. Black face cards are unusual or amazing but safe. Red face cards include an element of danger, whether that’s monsters, traps, or hazards.

For convenience, all of this can be represented in a quick-lookup table like the one below.

Boat. A ceremonial boat meant to ferry the deceased across the river that separates the land of the living from the land of shades. No longer usable as a boat but contains some treasure in the form of grave goods.

Burial Urns. Containers for the bones of those meant to serve and guard their masters in the afterlife. The bones reassemble into animated skeletons if they’re disturbed.

Chariot. Appears to be a noble’s chariot of state, but if the body of its owner is disturbed, ghostly horses appear so the dead warrior can use the chariot while defending his eternal resting place.

Clay Figures. Symbolic afterlife attendants that also hold the mummified hearts and livers of the deceased, which give them a semblance of life. They aren’t much of a threat in combat, but they follow along in the party’s wake and bedevil them at the worst possible time: getting under their feet to trip them, setting off traps, etc.

Crawling Hands. These ancients preserved the weapon hands of their slain enemies and kept them as trophies to demonstrate their warrior prowess when called before their bloodthirsty god. Dozens of those crawling hands are ripe for some revenge.

Crypts. Most of the bodies are just bones and dust, but a few are undead who defend their belongings and their rest.

Idol. A shrine to some deity who’s forgotten but not entirely gone or powerless. Prying gems out of the eyes is certain to trigger a trap and anger everything that lives in caverns.

Magic Spear. A nice treasure find tossed in the corner, where it’s been overlooked by all the troglodytes and deep dwarves.

Robes. Not much remains of the ancient ones’ ceremonial burial robes, but someone wearing these tatters might be able to pass unnoticed by the restless undead.

Scrolls. Nothing magical here, but careful explorers might salvage a few clues about the tribe that buried its dead here and about the layout of the caverns ahead.

Stone Calendar. This 12-foot-diameter stone calendar makes an impressive sight. Its only magical power is that undead creatures won’t enter the chamber, making it a safe haven for resting and for escaping from pursuit. 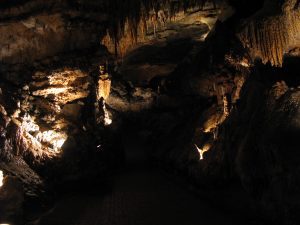 Throne Room. The greatest champion of the ancient warrior society was interred here, but the deep dwarves tossed his corpse in the corner and their king now sits on the carved throne. This is the main chamber of the current tomb and a tough fight for the characters—unless they manage to enlist the aid of the bones of the dishonored warrior and his long-dead but still fierce minions.

That’s the outline of the dungeon. Many of the special chambers won’t show up in a given random arrangement. That’s part and parcel of a generated dungeon, but we’ll look at ways around that issue in future installments.

The basic method assumes neighboring chambers are either adjacent or connected by very short corridors. Alternatively, after determining where doors are located in a chamber, roll the die again before placing it. A 6 indicates the rooms are directly adjacent; otherwise, the number rolled is the length of the corridor in multiples of 10 feet. Don’t worry about apparent contradictions. Any architectural oddness can be explained by differences in room size, by stairs up or down, by bends and twists in the corridor, or by a magical warp in the fabric of underlying space.