Encounters of Fortune: The Camel Spiders (Part 1 of 5) 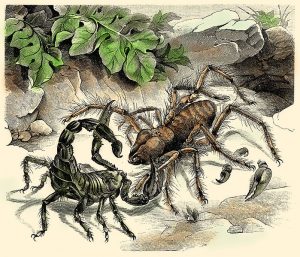 The riches and treasures diverted through the city of Cindass are quite remarkable and fuel a burgeoning enterprise for those motivated by money. Wealthy investors back dozens of archeological expeditions each year, and keeping these parties protected from the evils lurking in the sandy landscape is a premium job.

With more and more expeditions every season, Cindass has one of the largest concentrations of mercenary companies anywhere. Each week, these expeditions depart for destinations farther and farther away, hoping to find an ancient relic to bring them riches and glory…

A wealthy merchant by the name of Azlazier has been living in Cindass for nearly 5 years. He has been searching endlessly for a powerful gem hidden in a small, ancient dungeon. The gem has special properties, including the power to cure minor ailments with little to no effort. If Azlazier secured such an item, it would make him a content and wealthy man.

Azlazier believes he has found the entrance to the gem’s resting place and has recently been sending out requests for bodyguards to escort him to and from the site. Mercenaries who accept the contract have the opportunity to negotiate their wages and terms of employment. This encounter assumes these incidentals have already been negotiated.

Encounter 1: Entrance to the Caverns of Zazerlae

A large, dusty dune stands before you: a strange and rickety entrance directly into the dune is supported by rotted wooden beams. Though mostly covered with sand, tracks lead into the passage. The tracks are recent, and no attempt has been made to conceal them.

Illumination: Assuming the PCs traveled during the day, the encounter takes place in bright daylight.

Large Pile of Sandstone Boulders: Large piles of sandstone boulders litter the area and provide blocking terrain. Each stands 10 ft. tall and requires an Athletics check (Moderate DC) to climb. A character can make a melee basic attack against these squares to smash the sandstone rock formations. Any attack turns these blocking squares into difficult terrain with no other effect.

Giant camel spiders are very aggressive. They charge into combat and attempt to take out the smallest in a given group. They dance in and out to lure enemies away from the larger group.

A giant camel spider’s ultimate goal is to consume for its own nourishment. They bite opponents with their paralyzing bite. Once a foe is paralyzed, a giant camel spider devours it slowly, using its devour attack.

TRAITS
Uncanny Speed
The giant camel spider acts twice within initiative order, once at initiative count 20 and once at count 10. During each of these turns, it has a full set of actions.