Encounter Codex: The Trial of Fate, Faith, and Fortune 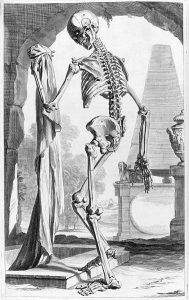 Encounter Codex presents encounters you can quickly slot into any adventure. They are system neutral and easily adapted to any edition (and other games for that matter) with little effort—just add stats from your favorite monster manual.

A three-headed skeleton encased in ceremonial plate armor surveys this pillared hall from atop a throne of glass.

The Oracle: Dungeoneers drawing close to the three-headed skeleton—or oracle—notice the glass throne is hollow and vibrates with the muted wail of spirits trapped inside it. The three skulls speak in discordant unison.

Dungeoneers with expert knowledge in religious history or legend lore recall tales of a three-headed undead seer who challenges adventurers with a series of trials. Those who successfully complete the tests are granted the boon of a long-dead god; those who fail are destroyed. Though sages are not certain of the oracle’s motives, it exists so that only the most worthy visitors live to enter the halls of its patron deity.

The Trial of Fate: When the dungeoneers enter the chamber, the oracle welcomes them, and explains that, by their incursion into the hall, they have accepted the first of three trials. If the heroes flee or refuse the trial, two invisible stalkers descend from the ceiling and attack. They fight until destroyed and pursue the dungeoneers wherever they go.

If the dungeoneers accept the oracle’s challenge, it bestows on them one of the following quests (choose or roll randomly). They have three nights to complete this quest: if they succeed, the oracle believes they are heroes spoken of in the myths of its people. If they fail, the oracle’s chamber disappears, and two invisible stalkers are sent to hunt the party.

The Trial of Faith: If the dungeoneers complete the trial of fate, the oracle motions for them to open the first tome to the bookmarked page. Opening it to any other page triggers a fireball trap, and the party fails the challenge. The same occurs if any of the books are opened out of order.

Each book contains a question, which the dungeoneers must answer to the oracle’s satisfaction. Only one dungeoneer need speak for the party. If the query is answered correctly, the oracle’s left skull opens its maw, and out flies an undead crow. It settles on the left side of the scale. If the question is answered incorrectly, the right skull opens, and the crow perches atop the right side. Do not reveal which side of the scale represents success or failure! Certainly the oracle makes no remarks about the correctness of their replies.

The answers are left to you—you might have specific answers in mind that tie to the milieu, or you could simply accept answers that are especially thematic, interesting, or well thought-out. Of course, you should act as if specific answers were expected…

If the dungeoneers answer more questions correctly than incorrectly, they proceed to the final trial. Otherwise, they are banished from the chamber, the invisible stalkers dispatched. If the scales are evenly weighted, the oracle spares the lives of the dungeoneers, on the condition that they leave the chamber, never to return, and vow never to enter the halls of his deity.

The Trial of Fortune: On completing the trial of faith, the oracle produces two chipped bone dice from its side, each with eight painted faces. Each dungeoneer is instructed to roll both dice—refusing to roll fails the trial.

Consult the table below to determine the results of the throw:

4. Agony—the dungeoneer becomes susceptible to damage for a time.

7. Firelight—the dungeoneer is marked as an intruder in the dungeon.

9. Warding—the dungeoneer is protected from magic for a time.

11. Resistance—the dungeoneer is protected from damage for a time.

13. Rejuvenation—the dungeoneer is healed of all damage and disease.

16. If any dungeoneer rolls this result, the entire party passes the trial. Effects already bestowed by the dice, good and bad, remain.

If half or more of the dungeoneers roll a 9 or higher, the trial is successful. Otherwise, they must render a great sacrifice unto the oracle’s deity or fail the challenge.

Rewards: If the dungeoneers complete all three trials, the oracle congratulates them and offers words of wisdom from his enigmatic deity. Reward the PCs with considerable experience, valuable treasure, potent magic items, crucial hints, or all of the above.