Skip to content
Home / Delve into the Depths in the Kobold Blog / Book Review: The Dagger of Trust, Pathfinder Tales 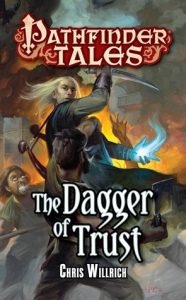 The Dagger of Trust, Chris Willrich

Gideon Gull is a bard in training—actually he is dual majoring in the bardic arts and becoming a spy/assassin. The college he attends is the Rhapsodic College, and right below it is the Shadow School. While finishing his training, Gideon is haunted by a specter from his past, or, more correctly, a fog. This magical fog plays on the fears of strong-willed creatures and turns weak-willed folk into murderers and insane people. Because this fog is being unleashed on the already tense border between Taldor and Gideon’s home country of Andoran, Gideon must gather up his bardic friends and figure out who is behind this insidious fog before a war tears these two nations apart.

Pazio could not have found a better author to write this installment of the Pathfinder Tales. Chris Willrich is best known for his outstanding Bone and Gaunt stories, and he brings his skill and style to this book. Willrich is one of those authors who adds original poems and lyrics to his stories. His bards don’t just recite poetry—they recite actual poems. Additionally, if they are going to sing a song, Willrich doesn’t just say Gideon began to sing the battle hymn of Andoran—he actually includes the lyrics. The ability to do these two things alone is noteworthy, but when you, as a reader, dig deeper, it is clear that Willrich doesn’t have to add original poems or lyrics to create a great story.

The beginning of this book is a little like the beginning of a James Bond movie: you start in the middle of some action. The big difference is that Gideon Gull isn’t involved in this opening in the way James Bond would be. Then we transition to Gull himself at the Rhapsodic Academy, where you can see the foggy mystery unfold. The actual structure of this story is a little like Conrad’s book Congo or the movie Apocalypse Now. The heroes travel along a river and each stop is an adventure unto itself.

The character development in this book travels at just the right pace for just about every character in the story. The only exception was for me was Leothric. He showed up very early in the novel, and even though he is Gull’s roommate, there is very little introductory commentary about him. Willrich could have used a paragraph or so to really set him up in a way that would have made the character have an even bigger impact on the story. He, like many of the characters, goes through changes during the course of the story, but that missing description from Gull would have made some of the things he says at certain points seem more natural.

Even with all of the boat time, this book is still full of action and witty banter—everything you would expect from bards. The magic that bards possess comes from their performance; Willrich understands this and in fact owns the concept. Every spell that is cast in this book is associated with a song, joke, or type of performance. Dog-piling on this is that Gull and friends don’t have complete mastery or understanding of their magic and strive to learn how to master it or expand it throughout the book. All of the spells that they cast are spells that a bard should cast, and Willrich did well to have the characters use those spells in very unique ways. Few of their spells are actually lethal, and while the group was a bit more pacifist than I would like, their hesitance to kill people who were under the influence made the story much more exciting. There were a few encounters where I felt like a ton of stuff happened in a very short time, but it was no deal breaker. One encounter with a charming supernatural creature in the river felt rushed and disconnected, but it was over really quickly.

There is an opus full of goodness in this novel. The bards are bardtastically bardic in the most bardadotious ways possible. Willrich is well informed on how things work in the Pathfinder world. He knows how to make you laugh even in the most serious situations without actually ruining the otherwise serious mood of some of those situations. This book is a wonderful exercise in the hero’s journey, without all of that classroom stuff. Don’t dismiss this book simply because it is part of a series or based on a roleplaying game—this is a great fantasy read.